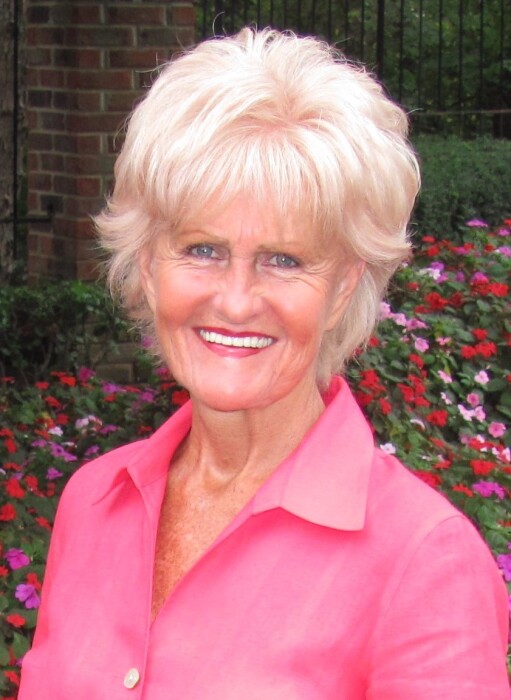 Beverly Sue (Hutchings) Johnson, age 77, of Nashville, Tennessee, embarked on her final journey on December 28, 2021. She was surrounded by her family as she passed away peacefully, departing this earth to live for all eternity in the glorious presence of our Lord. Words overflow like a fount, yet are woefully lacking, to adequately describe our BeBe – beloved wife, mother, grandmother, friend, and mentor – whose life was precious to so many, from start to finish.

Beverly was born at home in Cassville, Tennessee, halfway between Sparta and Smithville, on October 30, 1944. Her parents, Thurston and Thelma (Stanley) Hutchings, owned the grocery store next door to their home, and at a very early age, Beverly accompanied her father on his grocery delivery route. This marked the beginning of her thirst to explore what existed outside of her immediate surroundings. When Beverly was 8 years old, her family got a 14-inch Zenith black-and-white television set. It was there that she first had a vision of what was considered to be the perfect All-American housewife and mother, and she purposed herself to become that one day. Throughout her youth, she taught herself how to do everything – how to roller skate, water ski, dance, cheerlead, and twirl a baton, to name a few. Everything she set her mind to do, she did exceptionally well.

Beverly met the love of her life, Richard “Chic” Johnson, in the spring of 1959 at Clinton’s, a hamburger joint in Cookeville, Tennessee. Her beauty, energy, and innocence captured the heart of the Tennessee Tech freshman. They danced to the jukebox music, and it was all over for the both of them. They were crazy about one another and married two years later in August of 1961 at the First Methodist Church in Sparta. Their romance lasted over 60 years, and the dynamic duo had a bond like no other. Their love was truly one for the storybooks.

Beverly’s quest to become the best housewife and mother began the day after her wedding day. In the first year, she completed her senior year of high school and taught herself how to cook, and in her second, she bought her first home with Chic in Nashville. She gave birth to Monica in 1963 and Blake in 1967, and not one day went by that Beverly did not have the house spotless, the children bathed and dressed in their best, herself dressed perfectly with impeccably styled hair, and a scrumptious dinner hot on the table when Chic arrived home from work. She took complete care of everything inside the home to allow Chic to concentrate on his successes outside the home.

She dearly loved Monica and Blake and was tremendously active in all aspects of their lives, attending every game, play, and children’s party. She raised her children to respect authority, be honest, work hard, be kind, and always do their best, and was thrilled when they grew up and married spouses who believed these to be essential virtues too. She adored her son-in-law Murrey, and her daughter-in-law, Juliet, and that adoration multiplied exponentially when her grandchildren were born. When Monica’s son, Jonathan, was born in 1990, Beverly quickly taught herself the photography skills she needed to exquisitely document every breath Jonathan took. As he began playing sports, she became his biggest fan, and once again, she enthusiastically began the cycle of perfect attendance at every football, basketball, soccer, and baseball game. Jonathan was the prince for 9 years, until the girls came along – Monica’s daughter, Phoebe, in 1998, and Blake’s daughter, Gracie in 2002, and Madison in 2006. She vigorously supported each of them at every single sporting, acting, modeling, and awards event they had until the time of her passing. She taught her grandchildren to be committed to their faith in the Lord, humble in their demeanor, and always generous and kind to others, and she had an extraordinarily unique relationship with each of them. As a housewife, mother, and grandmother, she excelled abundantly, just as she had dedicated herself to do all those years ago. Beverly was the epitome of the Proverbs 31 woman.

Her lifelong love of travel began with her first trip out of the country to Bermuda with Chic in 1966. They went on to travel together to the Bahamas, Europe, and Great Britain in the 1970’s, and took Monica and Blake to Europe in the 1980’s, jumpstarting their love for travel as well. With various family members and friends, Beverly extended her travels across the globe, including all the continents except Antarctica. She would painstakingly research and plan every detail of the trips before handing the information over to the travel agent to book, all before the internet existed, which made research easy and allowed people to book travel on their own. With the additions to her family of her children’s spouses and grandchildren, she started her travels all over again, showing them and sharing with them the history and culture of the places she’d seen. By far, her favorite place in the world was Israel, which she was able to visit twice – once in 1977 with Chic, Monica, and Blake, and once in 2013 with Monica and Phoebe, Beverly’s granddaughter. Watching Phoebe be baptized in the Jordan River was one of the major highlights of her life.

According to Beverly, the most important event in her life occurred in 1970, when she accepted Jesus as her Lord and Savior. With God at the center of her life, she became even more beautiful and sensitive to others. She felt her new purpose was to reflect the light and love of Christ. She truthfully became the hands and feet of the Lord, not only aiding those who were clearly in need, but she also sought daily to help those who were less obviously in need – such as the grocery store bagger, the grasscutter, the phlebotomist, for example – sincerely listening to them; witnessing to them of the love of Jesus; offering wise counsel; and giving them gifts and scriptures appropriate for their circumstances. For the last 50 years, no one has ever heard her say a negative, cross word to anyone. She steadfastly modeled Christ’s love, whether behind closed doors or for all to see. Because of this, her entire family has personal relationships with the Lord and she has led countless others to Jesus also. This is the legacy for which she will be remembered the most.

Beverly was preceded in death by her father, Thurston Hutchings, and her mother, Thelma (Stanley) Hutchings, as well as her brother, Jessie Luther Hutchings, and her sister, Carol (Hutchings) Molloy. She is survived by her husband of 60 years, Richard “Chic” Johnson, her daughter, Monica (Murrey) Tulloss, her son, Blake (Juliet) Johnson; and her grandchildren Jonathan Tulloss, Phoebe Tulloss, Gracie Johnson, and Madison Johnson.

Please click here to view the video tribute
To order memorial trees or send flowers to the family in memory of Beverly Johnson, please visit our flower store.