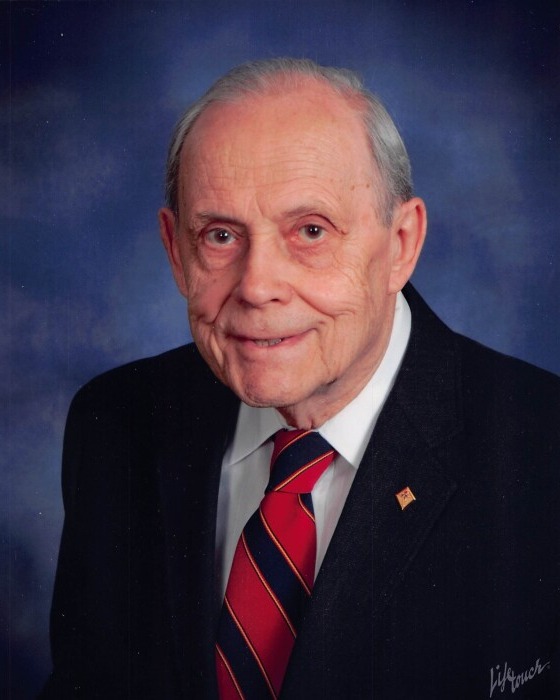 Edwin S. Myers, age 97 of Franklin, TN passed away January 8, 2023. He was born on November 30, 1925 to David Edwin and Gertrude May Sullivan Myers in Baltimore, Maryland. While employed by United States Fidelity and Guarantee Co., he obtained an A.I.I.A. Designation in insurance and was transferred to Nashville in 1954 as Fire and Marine Superintendent of the Nashville branch office. Edwin was a past president and longtime secretary-treasurer of the Tennessee Insurance Association, and a past president of the Tennessee State Fire Prevention Association. In 1965, he was a warded a presidential citation by the Insurers of Tennessee Association. Also, he was a past Most Loyal Gander of the Honorable Order of Blue Goose International, an insurance fraternal and charitable organization. In 1992, he was named Volunteer of the Year by the Brentwood Library.

Following retirement after 35 years with the U.S.F.&G., Edwin founded Myers Products Co. and Save-On Printing Co. which he operated for another 20 years before retiring in 2008.

Services will be at St. Andrew Lutheran Church of Franklin, 908 Murfreesboro Road, Franklin, TN 37064 on Saturday January 14, 2023. Visitation and family and friends will be from 9:00-11:00 a.m. followed by a Celebration of Life Service at 11:00 a.m., Rev. Morgan Gordy and Rev. Julian Gordy officiating. Entombment to follow at Williamson Memorial Garden of Franklin, TN. In lieu of flowers, memorial gifts may be made to St. Andrew Lutheran Church, 908 Murfreesboro Road, Franklin, TN 37064. WILLIAMSON MEMORIAL FUNERAL HOME, 615 794-2289 williamsonmemorial.com

Please click here to view the video tribute
To order memorial trees or send flowers to the family in memory of Edwin Myers, please visit our flower store.