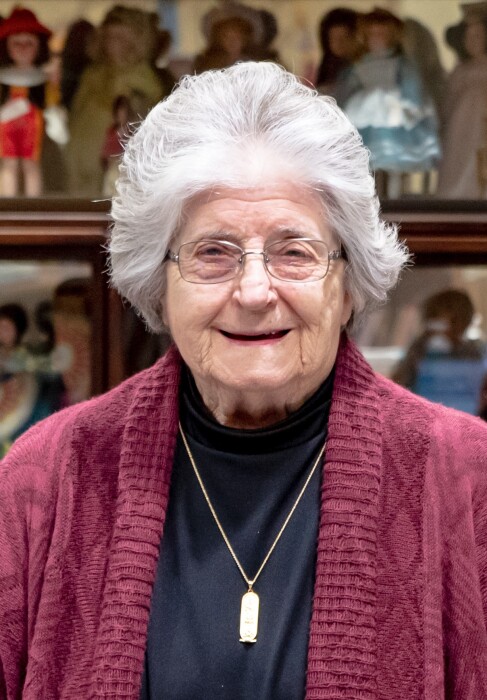 Eva Nell Pickle Hunter was born December 26, 1927, in Amory, Mississippi to the late Vertis and Alice Carter Pickle. She had an amazing 94 years before joining our Heavenly Father on November 21, 2022. We are all thankful for the life that she lived and the legacy that she is leaving behind. In addition to her parents, she was preceded in death by her husband Mark Hunter, a stillborn daughter, son Haran Hunter, and siblings Mable Pickle, Hester Pickle, and Lester Pickle. Cherishing her memory are 3 daughters: Mara (Rudy) Rice of DuQuoin, IL; Rena (John) Burns of Franklin, TN and Cindy (Mark) Windle of Hot Springs, AR; grandchildren: Ryan (Dana) Rice of Lake St. Louis, MO; Keenan (Jessica) Rice of DuQuoin, IL; Joy (Justin) Smith of Franklin, TN; Chris Burns of Columbia, TN; Nick Windle, Hot Springs, AR; Hunter Windle, Little Rock, AR; and Alexandra Windle, Tokyo, Japan. Sixteen great grands: Colin, Dalton, Makaylie, Riley, Austin, Cooper, Bristol, Emett, and Faron Rice; Jackson and Jeanell Smith; Gabriel Burns; Cameron, Eva Nell, Jonah, and Heidi Windle. Also survived by a sister, Martha Word of Aberdeen, MS and numerous nieces and nephews. Being born a sharecropper’s daughter, she only dreamed that she would one day be able to fly in one of the planes that she saw overhead. When Eva Nell graduated as valedictorian of Amory High School, she won a trip to Cuba which began her love of seeing the world. She traveled to over 49 countries on 6 continents during her lifetime. She met Mark Hunter, the love of her life, at church after he had returned from World War II. Married four years later April 9,1949, they enjoyed almost 59 years of marriage before his passing in 2008. Eva Nell was the first person on either side of her family to attend college. While attending the University of Southern Mississippi, she had a work scholarship as a student secretary to the President. Her major was in math with a minor in English. She later returned to school at the University of Alabama using National Science Foundation scholarships for a M.S. degree with emphasis on computer programming. During her teaching career at both Decatur and Austin High Schools, she taught math, English, and drama. She was the first computer science teacher at Decatur High School and later served as Asst Principal for 10 years. Until the end, she enjoyed technology using her computer, iPad and loved FaceTime. She was a faithful member of Central Baptist Church. She was a faithful servant after becoming a Christian when she was a teenager. She taught Sunday School, Training Union and was volunteer librarian at Central Baptist church, Decatur, Alabama for 64 years, retiring in December 2021. In 2015, she received the Lifetime of Mission Service Award from The Alabama Baptist State Convention. As a volunteer librarian she taught conferences for Lifeway for many years including teaching at Glorieta and Ridgecrest. She taught her last library conference for the North Alabama Library Conference in November 2019. She also helped set up libraries all over the world as well as trained library workers in Austria, Portugal, Puerto Rico, Brazil, and Switzerland. She was a national library specialist. She authored several library articles, wrote two online library courses, wrote the “Classification and Cataloging” section of the Church Library Ministry Information Service, and updated A Classification System for Church Libraries. While living at Brookdale Senior Living in Decatur, Alabama, she helped set up a library for the residents. Her last project was to set up a library for The Hearth in Franklin, TN where she had been living since May. She was unable to see that project to completion but was able to give Joy Rice Smith and Morlee Maynard final instructions on what needed to be done. We were blessed to have such a wonderful Godly mother who took us to church and encouraged us to have a relationship with Jesus. Some of her last words were “people need Jesus”. She was a good and faithful servant until the end. What a legacy she has left behind with big shoes for us to fill. She also encouraged us to pursue our dreams and get a good education. She loved Central Baptist Church and missions. She dressed up as Lottie Moon at Christmas and Annie Armstrong at Easter and presented monologues in churches to support missions. In lieu of flowers, donations in Eva Nell Hunter’s memory may be made to Central Baptist Church library, building fund or the Lottie Moon Christmas offering through Central Baptist Church, ATTN: Financial Secretary, 2801 Hwy 31 South, Decatur, AL 35603. All are invited to celebrate the life and legacy of Eva Nell Hunter at 5:00 PM on Monday, December 19 in the sanctuary of Central Baptist Church, Decatur, AL with Bro. Rob Jackson, Bro Bryan Blass, and Bro. Rob Hatfield officiating. Visitation will begin at 4:00 PM until service time. Services at Smithville Baptist Church, Smithville, MS on December 20 at 10 AM with graveside services following at Smithville Cemetery.

To order memorial trees or send flowers to the family in memory of Eva Hunter, please visit our flower store.