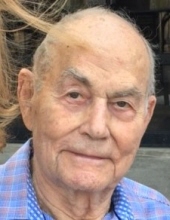 Ewing W. Harris, age 97, passed away peacefully on June 2, 2022 at Orchard Grove in Romeo, MI with family by his side. Ewing was born August 5, 1924 to Joseph and Bertha (Kelley) Harris in Franklin, TN. He grew up working alongside his father as a farmhand in Tennessee, he entered the U.S. Marine Corps during World War II where he served from August 14, 1943 to February 23, 1946. He received an Honorable Discharge holding the rank of Corporal. He was employed by General Motors beginning February 19, 1958 and retired May 1, 1989 from the General Motors Tech Center in Warren, MI. While working for General Motors he earned his high school diploma and graduated from Sterling Heights High School on June 21, 1977. He later attended Macomb Community College. Ewing was an avid golfer, he enjoyed skiing in Colorado, ran his first Detroit Free Press Marathon at the age of 61 years young, and shared his love of traveling around the world with his family and friends. Places visited include multiple trips to Hawaii (his favorite), Austria, New Zealand, and Australia, just to name a few! He could be found on occasion eating an apple pancake at The Pantry Restaurant, a filet at Longhorn’s Steakhouse, or in the kitchen making his famous Cherries Jubilee, but one thing you would rarely catch him without was a Maker’s Mark Manhattan, on the rocks, with extra cherries. He lived life to the fullest.

To order memorial trees or send flowers to the family in memory of Ewing Harris, please visit our flower store.