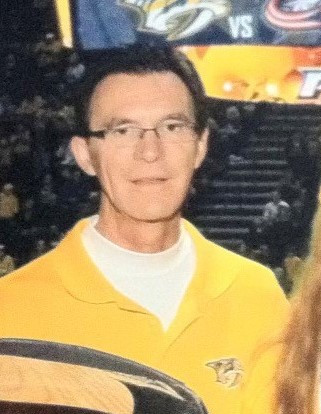 Harry Lee Marlin, age 66 of Bon Aqua, TN passed away July 17, 2022. He was born in Franklin, TN to the late Walter & Lillie Marlin. Harry was a huge Nashville Predators, Tennessee Titans and Atlanta Braves fan. He loved all things Rock & Roll! Harry worked for CPS for over 20 years. He later worked for Nashville Wrap, and he retired from Koch Logistics. Harry is preceded in death by his brother, Bill Marlin. He is survived by his wife of 41 years, Peggy Marlin of Bon Aqua, TN; daughter, Chelsea Marlin; sisters, Mitsey (James) Connelly of Santa Fe, TN, Pheebie (Tony) Anderson of Santa Fe, TN and Sue (John) Harmon of Smyrna, TN; grandcat, Hercules; brothers in-law, Darrell (Susan) Ragsdale of Dickson, TN and Ricky (Ashley) Ragsdale of Tuscaloosa, AL; mother in-law, Ruth Ragsdale of Bon Aqua, TN and many loving nieces and nephews. A Celebration of Life service will be held at a later date. The family would like to the thank the Williamson Medical Center nurses and doctors on the 6th floor as well as the nurses in ICU for the wonderful care they provided Harry during his stay. Memorials can be made in Harry’s memory to the charity of your choice. WILLIAMSON MEMORIAL FUNERAL HOME & CREMATION SERVICES, 615-794-2289 . www.williamsonmemorial.com

To order memorial trees or send flowers to the family in memory of Harry Marlin, please visit our flower store.