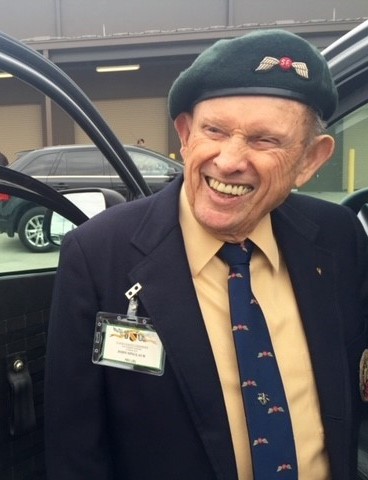 Major General (Retired) John K. Singlaub was born in Independence, California, on July 10, 1921. After graduating from Van Nuys High School in 1939, he attended the University of California, Los Angeles, completing a BA in Political Science. With the United States entering World War II, MG(Ret) Singlaub joined the U.S. Army and commissioned as a Second Lieutenant on January 14, 1943.

After joining, MG(Ret) Singlaub was recruited by the Office of Strategic Services (OSS) in November 1943. As part of JEDBURGH Team JAMES, he made his first combat jump into German occupied France on 11 August 1944 to arm and direct the French resistance.

MG(Ret) Singlaub also served in the Pacific theater of operations where he landed in China to train and lead Chinese guerrilla forces against the armies of Imperial Japan. Just before the Japanese surrendered, he led a parachute rescue mission (his second combat jump) into an enemy Prisoner of War Camp on Hainan Island in 1945. This resulted in the release of 400 Allied Prisoners of War. As one of a handful of Special Operations Branch personnel retained by the Strategic Services Unit (successor to the OSS), MG(Ret) Singlaub remained behind in China to continue reporting about the ongoing Civil War.

MG(Ret) Singlaub was further assigned as Chief of a U.S. Military Liaison Mission to Mukden, Manchuria, where he served for three years immediately following World War II. He served two tours during the Korean War – one tour with the CIA in Korea as a part of the Central Intelligence Agency’s Joint Advisory Commission, Korea (JACK) and the other as an Infantry Battalion Commander in the Third Infantry Division.

In 1971, MG(Ret) Singlaub attended flight school at Fort Rucker as a 55-year-old Brigadier General so that he could better understand and employ the increasing use of helicopters in Special Forces Operations.

He served as the Chief of Staff, United Nations Command, United States Forces, Korea, and the Eighth U.S. Army in Seoul, Korea. Concurrently, he served as the U.N. Command Senior Military Member of the Military Armistice Commission at Panmunjom.

Interspersed with the above wartime command positions were numerous training assignments both at home and abroad. MG(Ret) Singlaub was instrumental in the establishment of the Ranger Training Center at Fort Benning, Georgia, where he served as an instructor. He helped establish the Modern Army Selected Systems Test, Evaluation and Review activity at Fort Hood, Texas and was named responsible for training and combat-readiness of the Army Reserve and Army National Guard Units in a ten-state area. MG(Ret) Singlaub also served as the Deputy Assistant Secretary of Defense for Drug and Alcohol Abuse.

In April of 1978, MG(Ret) Singlaub retired from the Army having served an illustrious career that spanned four decades. From 2009 on, MG(Ret) and Mrs. Singlaub made their home in Franklin, TN.

After leaving the service, MG(Ret) Singlaub remained active in the Special Operations community and was recognized with the United States Special Operations Command’s (USSOCOM) Bull Simons award in 2011. Following his military service, he traveled extensively in the U.S. and abroad lecturing on national security issues with special emphasis on the requirement to maintain U.S. Forces in Korea and the need to upgrade and consolidate the U.S. Special Operations Forces.

To view the service via live stream, you may use the following link: https://generationschurch.co/media/join-us-sunday-service-live/

To order memorial trees or send flowers to the family in memory of Jack Singlaub, please visit our flower store.