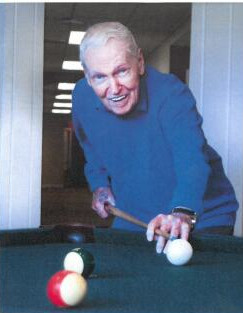 He was born on September 23rd, 1928, in Brooklyn, New York.  James was a proud Veteran, serving in the U.S Navy during World War II followed by a career with the New York City Police Department as a Detective. Once he retired he always knew how to entertain a crowd with his stories, cameo’s on television shows, and radio.

He was very proud of his family and the legacy he has left through them. He had great joy being with his great grandson’s and seeing life through their eyes. He loved his community and many friends at Brookdale Senior Living in Franklin, TN where he enjoyed playing pool and daily card games and dancing.

Jim was preceded by his parents, Raymond and Margaret McFarland; sister and brother-in-law, Maureen and Hook O’Dowd.

Funeral Service will be held at 11:00 AM on Wednesday, October 26, 2022, at Williamson Memorial Funeral Home by Father Michael Baltrus.

Visitation will be held one hour prior to the service.

Please click here to view the video tribute
To order memorial trees or send flowers to the family in memory of James McFarland, please visit our flower store.