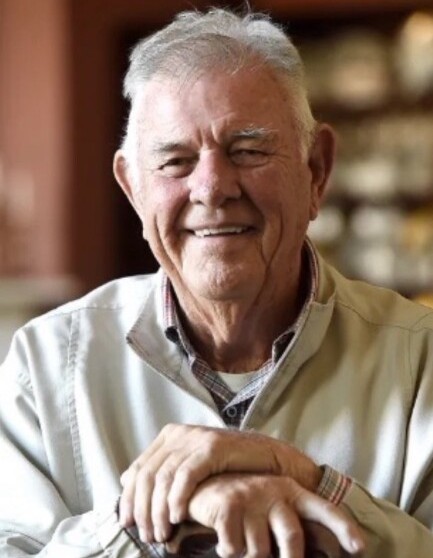 James (Jimmy) Cannon Gentry, age 96, flew to the arms of Jesus on the morning of April 21, 2022 from his home at Gentry Farm. A loving husband, father, grandfather, great-grandfather, uncle and friend to countless loved ones.

Jimmy was born in Wyatt Hall on November 28, 1925 and was the seventh of eight children. His childhood was filled with hunting, fishing and trapping. After losing his brother David in World War II, he entered the war as a private in the army and served in 42 Rainbow Division in European front and was a liberator at the concentration camp Dachau. Following the war, Jimmy came back to Franklin and married his high school sweetheart Rebecca Channell and they had three sons.

Jimmy began his coaching career before he even graduated from college when the Franklin High School principal asked him if he would be interested in coaching the football team. Soon after graduating from Peabody College he started teaching at Franklin as well. In the early 1960’s he moved to Battle Ground Academy to teach biology and coach and ended his career at Brentwood Academy teaching Tennessee History and coaching football. Many students remember his chalk drawings of funny fish and other diagrams which made his class a favorite. He coached over ten state championship football programs in his lifetime.

During his retirement, Jimmy enjoyed raising strawberries and continued to volunteer coach several local teams. Jimmy also enjoyed speaking to groups all over the country, telling of his WW II experiences. He continued to run his summer day camp until he was in his 80’s and always loved seeing the children visit the farm for field trips. His most enjoyable time was spent with his great-grandchildren who dearly loved their granddaddy.

A funeral service will be conducted 4:00 PM Tuesday April 26, 2022 at Fourth Avenue Church of Christ located at 117 Fourth Ave. North, Franklin, TN. Visitation will be held Monday from 4:00-7:00PM and one hour prior to the service on Tuesday at the church.

In lieu of flowers donations can be made to Franktown Open Hearts https://franktownopenhearts.com/donate/ WILLIAMSON MEMORIAL FUNERAL HOME & CREMATION SERVICES, 615-794-2289. www.williamsonmemorial.com

To order memorial trees or send flowers to the family in memory of James "Jimmy" Gentry, please visit our flower store.