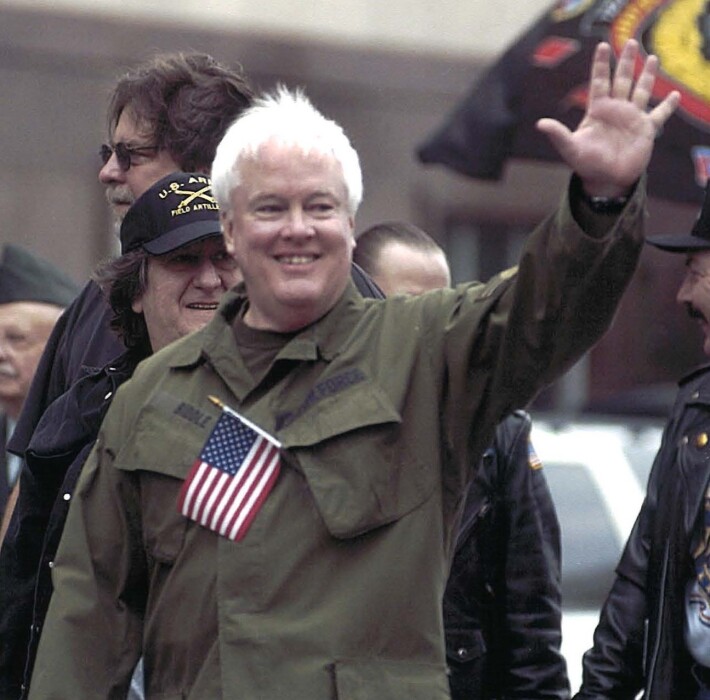 Hall of Fame sports columnist and popular sports talk show host, Joseph Johnson Biddle, known to those closest to him simply as “Bid”, lost his courageous battle with dementia on October 26, 2022. He was 78 years old and survived by his loving, caring wife Sharon, who along with friends and family will continue to honor his legacy by living their lives to the fullest. He is also survived by his sister, Sally (Rick) Heydel; step-daughter, Leigh Anne Scott; God-Daughter Greeley Fulton; aunt, Mary (Chuck) Dickinson; several cousins, nieces and nephews.

While Bid was a winner by all accounts, there was one area he did not always win. I Beat Biddle was a contest that to this day, decades after it last existed, is still talked about. Bumper stickers can still be seen around Middle Tennessee and stories are told about the time a reader beat Biddle by making selections for that week’s college football games and won the sticker.

Bid was born in Johnson City, Tennessee, graduated from Science Hill High School and then East Tennessee State University. His journey then took him to the United States Air Force where he spent time in Vietnam before returning to Johnson City where he took a job at the Johnson City Press Chronicle and began his Hall of Fame journalism career. After just one year, Bid took a leap of faith and accepted a job at the Daytona Beach News Journal. In late 1979, Bid jumped at the opportunity to move to Nashville and work with an American icon, Fred Russell. The two developed a special relationship that was much deeper than sports writing and would last until the day Mr. Russell passed away in 2003. Bid wrote for the Nashville Banner and later the Tennessean. He also wrote for WKRN’s website and ended his journalism career entertaining readers in Williamson County at the Williamson Herald. Bid spent 7 years working with the Davidson County Sheriff’s Department before retiring to spend more time with Sharon.

While most of his accolades came from his ability to put pen to paper, Bid gained significant popularity across Middle Tennessee through his role as co-host of the top-rated radio sports talk show, SportsNight. His quick wit, his sports knowledge and infectious personality, along with his uncanny ability to ask great questions, made SportsNight the most popular show in the market for many years. As his travels for the paper would take him to the largest sporting events in the country, Bid would call in with interviews, insight and yes, his famous Johnny Majors inspiration.

As Bid once said, “who would have ever thought a kid from Johnson City would get to do all this”. He covered 31 Super Bowls, 31 NCAA Final Fours, 30 Masters tournaments (his favorite), 12 World Series, 2 Summer Olympic Games and a Ryder Cup plus thousands of the best college football and basketball games in the Southeast. While these major events got the headlines, Bid truly enjoyed standing on the sideline of a high school football game or sitting courtside in a small gym, as he knew every coach, referee and media member, regardless of the area of town. Bid loved people!

The awards and recognition were special, but Bid was about people. Writing about sports and talking about sports might have been what Bid did for a living, but it wasn’t who he was. Bid was a giver and one of the most generous, kindest people you could ever know. His acts of kindness for people that could never repay him and many of which have gone untold, changed lives forever. Bid had a passion for golf, for “meat and threes”, wearing bright pastel colored sweaters and for most every sport but his true passion was people…that included those closest to him that he loved dearly and those strangers that didn’t stay strangers for long.

All donations to the Joe Biddle Scholarship fund will be distributed to those in need thru a variety of charities (selected by the board) beginning in 2023, with a focus on Joe’s passion of supporting the game of golf here in Middle Tennessee. Through the generosity of the Eller Family and with support from many other friends and family, a charity golf tournament will be started in 2023 at Hermitage Golf Course to annually raise funds to support this scholarship.

Join family and friends from across the country as we celebrate the life of one of the all-time greats…great husband…great brother…great friend…great sports columnist…Joseph Johnson Biddle at Forest Hills Baptist Church on Tuesday the 1st of November 2022. Visitation from 9a-11a followed by service at 11a. Bid will be buried at Middle Tennessee State Veterans Cemetery at 1p following the service.

To view the service live visit the link below:

To order memorial trees or send flowers to the family in memory of Joseph "Bid" Biddle, please visit our flower store.