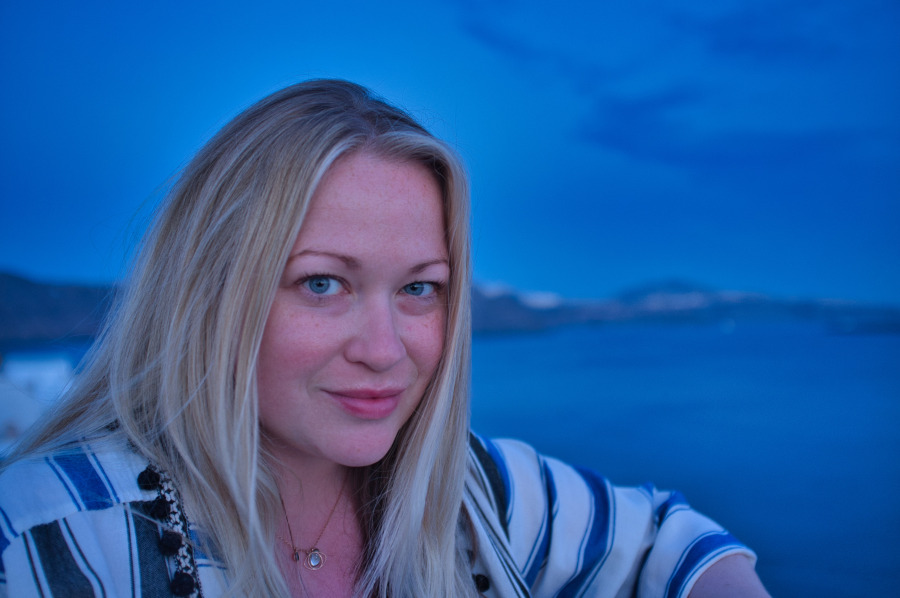 Kristen Marie Caslowe, age 37 of Nashville, TN went home to be with the Lord on Friday, February 4, 2022.

Kristen was born in Lexington, KY on June 20, 1984 to Janie Caslowe.   She went to grade school at St. Margaret Mary in Louisville, followed by Assumption High School in Louisville, and attended college at the University of Findlay.  As a lover of all animals, especially chihuahuas, she brought that passion to her chosen profession—serving as a veterinarian, after receiving her Doctor of Veterinary Medicine degree at Auburn University.

After graduating from Auburn, she worked with large breed animals before eventually finding her way to Franklin, TN, caring for all types of small breed animals, mostly pups. She would later meet and marry Chris Lam, and together they traveled the world collecting all things chihuahua. Her photo here was taken on their trip to Greece. They also shared an enthusiasm for Star Wars. Kristen was a staunch Boba Fett fan, contributing to the prolific fan fiction community with her own spin on the bounty hunter’s adventures.

She was preceded in death by grandparents Blanche and Victor Caslowe, and her two pups Lola and Beans.

A Funeral Mass will be held at 11:00 AM, Friday, February 11, 2022, at St. Philip Catholic Church, Franklin, TN with Father Bala Marneni Showraiah officiating.   Visitation will be one hour prior to the Mass.  A lunch reception hosted by the church will follow.

Even in death, she wanted to be a blessing to animals. Her final resting place will be as a coral reef, buried at sea where natural reefs are degraded, to continue her life’s work: providing for animals.

Expressions of sympathy may take the form of donations in loving memory of Kristen Marie Caslowe to support Kristen’s dedication to animals at Heifer International (heifer.org) or your local no kill animal shelter like the Nashville Humane Association (nashvillehumane.org), or to aid Shelby’s Way and their mission to bring awareness to suicide prevention (shelbysway.com).

Please click here to view the video tribute
To order memorial trees or send flowers to the family in memory of Kristen Caslowe, please visit our flower store.