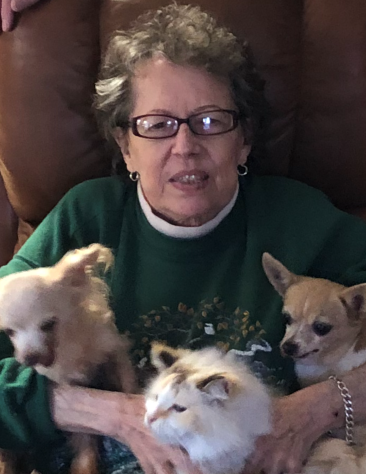 Lexie Howard Hagan, age 78, of Franklin, Tennessee, passed away peacefully on February 3, 2022, while surrounded by her family. Lexie was born in Pensacola, Florida on September 14, 1943, daughter of Dean W. and Dixie Lex Howard. Lexie attended Sacred Heart Academy in Louisville, Kentucky. She earned an Associate of Arts in Psychology from the University of Louisville, then a Bachelor of Science in Sociology from the University of Tennessee, and then a Paralegal Certificate from the Southeastern Paralegal Institute. Lexie worked as a social worker and then as a paralegal untilshe decided she wanted to work in the field of geriatric care and established her business known as Lexie Hagan, Personal Administrator. From 1994 to 2017 when she semi-retired, Lexie managed many cases for the elderly and others in Williamson, Davidson, and surrounding counties as a Court Appointed Conservator for both financial and personal needs.

As anyone who knew Lexie can tell you, her love, care, devotion, and support for animals, especially small dogs, cats, and horses, was unprecedented. As a result, she followed her passion and helped create the Williamson County Humane Association (WCHA) in the early 1980's with the hope of having a centralized functioning shelter for animal rescue in Williamson County in the future, which is now a reality. The WCHA provided an organized way for animals to be rescued, receive medical care, and be fostered, with the ultimate goal of finding loving forever homes. Many of these dogs and cats needed special care in order to socialize them and make them adoptable.

Lexie took these special needs animals into her home to personally foster and work with them until they were able to be adopted. Lexie was also very involved in the interviewing and final placement of fostered animals. The story goes that one of her potential adopting families said that the process and interview for adopting a dog through Lexie was harder and more intense than when they adopted their own children.

The majority of the dogs and cats were eventually adopted out; however, she fell in love with many of them and kept them as pets. When Lexie died, she still had five dogs and two cats, who were fondly known as her "kids".

As a result of her love and hard work, hundreds of animals in Williamson County were helped and saved. Through the continued assistance and support of many friends and citizens who shared Lexie's life-long passion and love of animals, the 35,000 square foot, $15.4 million Williamson County Animal Shelter in Franklin, Tennessee was opened in February 2022.

Lexie was preceded in death by her husband, Michael Hagan.

The tamily wishes to extend their sincere thanks to Lexie's close friends who provided such wonderful friendship, love, compassion, and care to Lexie.

There will be a private family service and interment for Lexie at Resthaven Memorial Cemetery in Louisville, Kentucky.

To order memorial trees or send flowers to the family in memory of Lexie Hagan, please visit our flower store.