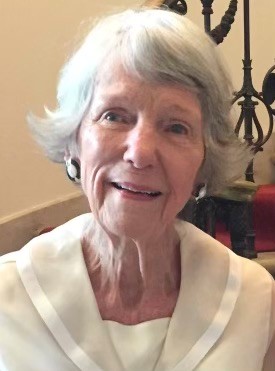 Nancy Anderson Landstreet died peacefully at her childhood home on August 31st, 2022, a few months before her 99th birthday.

She is survived by five children: Lucia Landstreet Cherry (Larry), James Collins Landstreet II (Jennifer), Jane Landstreet Longhurst (Rusty), Beverly Walter Landstreet IV (Julia) and Thomas Fairfax Landstreet (Laura), 15 grandchildren and 5 great grandchildren. A great debate rages as to which of her five children was her favorite but, true to her character, she took the answer with her.

Nancy attended Parmer Elementary School, Ward Belmont and graduated from Vanderbilt University in 1945 majoring in Pre-Med (because, as she put it, “that’s where all the boys were”). She was an avid bridge player. As an active member of the Garden Club of Nashville for over 50 years, she was recognized for her beautiful flower arrangements and was presented the Steel Magnolia Award for service.

She will be remembered for the twinkle in her eye, her pleasing manner, quick wit, beautiful countenance, Christian faith and unassuming demeanor. She was always grateful and her love affair with her husband was the stuff of legend. She treated everyone she met with the same love and respect. May her indomitable spirit last in all our hearts.

To order memorial trees or send flowers to the family in memory of Nancy Landstreet, please visit our flower store.