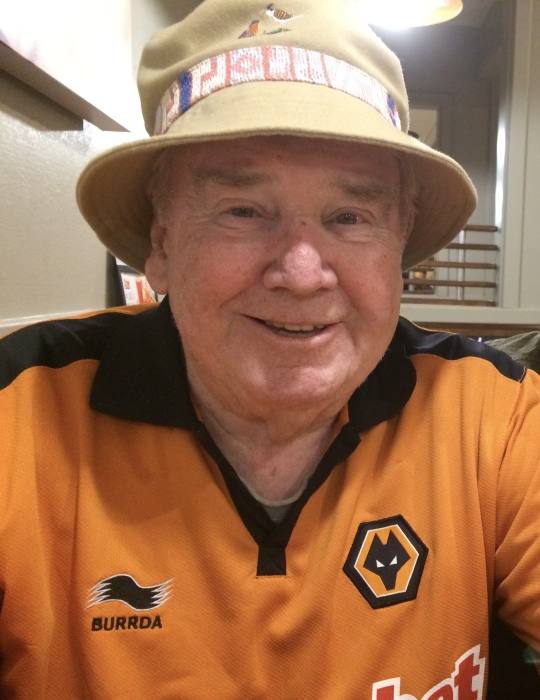 Ronald George Poston, 84, passed away peacefully May 6, surrounded by his loving family. Ron was born in Shrewsbury, England, in 1937. During World War II he evacuated to the countryside, and then grew up in a series of stately manors across England and Wales where his mother was a cook. He attended Brewood Grammar School, which was founded in the 15th Century, and he gained a metallurgical engineering degree from Wolverhampton Polytechnic (now the University of Wolverhampton). He married his love Valentine (Tina) Venables, and worked at Wickman Wimet in the UK before taking a huge leap of faith and moving his family to the US in 1980, beginning an American odyssey that continues today. He traveled the world for work and pleasure, ticking off dozens of countries, including trips with Tina to New Zealand, Italy, South Africa and Mozambique. Ron loved parties, dancing with Tina, music and refereeing youth soccer, which he did into his 70s. He was also renowned across Williamson County for his rendition of “I’m Henery the Eighth, I Am,” usually clad in his Union Jack waistcoat and accompanied by The Pickled Beats. He was a passionate Wolverhampton Wanderers fan, seeing them play historic European matches in the 50s, and League Cup wins in 1974 and 1980. When he saw a game at Molineux in 2018 with his family, he wept for joy. He also loved going to Nashville Soccer Club games and attended his children and grandchildren’s games and activities whenever possible. When we lost his beloved wife in 2011, Ron was devastated, but he kept traveling, visiting New Zealand, Hawaii, Thailand, Italy, Germany and England while continuing to spend time with his family across the US and in Thailand. Even though he had health issues in recent years, he always had a big grin on his face and never complained. Last year he was able to meet his fourth great grandchild, which brought him immense joy. Special thanks go to his daughter Wendy Poston Shotwell, for giving so much of herself these past few years to ensure his health and dignity. She, her family, and Stephen, Lee and their families, made sure he was loved and well taken care of in his final years. Ron was an exceptional human being who set the standard for living life well, taking risks, and being funny, gentle and a dedicated friend. While his family misses him immensely, they are glad that he’s now reunited with Tina and friends who have preceded him. He leaves behind a big family: Sons Stephen Poston (Debbie), Lee Poston (Milanga), daughter Wendy Shotwell (David), grandchildren Brooke Friend (Joe), Brittany and Blake Poston (Heather), Ethan, Bailey and Christina Shotwell, and great grand-daughters Makayla, Eleanor and Lillian Friend, and Samantha Poston. A celebration of life will be held on Saturday, May 21 at Williamson Memorial Funeral Home, 3009 Columbia Avenue, Franklin, TN 37064. Visitation will be from 10-11 am, celebration from 11-noon. In lieu of flowers, please donate in his name to the Patient Advocate Foundation (www.patientadvocate.org) or Refugee Soccer (www.refugeesoccer.org)

Please click here to view the video tribute
To order memorial trees or send flowers to the family in memory of Ronald Poston, please visit our flower store.